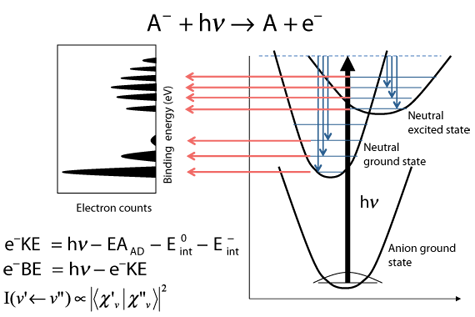 The main experimental tool we use in our lab is Photoelectron Spectroscopy (PES) of Transition Metal Suboxides. In particular we focus on transition metal oxide clusters. By using a combination of anion photoelectron spectroscopy and density functional theory (DFT) calculations we are able to explore the electronic and structural properties of these systems. A simplified energy diagram for PES is shown to the right. We start with an anion in its ground electronic state, then detach an electron using a single photon. The kinetic energy (e−KE) of the detached electron is measured and then converted to electron binding energy (e−BE), which is independent of the detachment laser wavelength. In general, the ground state and low-lying excited neutral states are energetically accessible.

Transition metal oxides are widely used as catalysts in industrial processes such as oxidation, ammoxidation and dehydrogenation reactions. A number of processes, including high-temperature processing and doping with additional transition metals, have been found to improve performance and specificity of these catalysts. Catalytic activity is believed to occur on edges or defect sites such as oxygen vacancies, where unique molecular-scale interactions between the metal oxide and a substrate can arise, although characterization and subsequent optimization of these interactions is difficult because of dilution effects. Because bonding in metal oxides is localized, studying small metal oxide clusters in the gas phase can help elucidate the physical, electronic and chemical properties of metal centers in non-traditional oxidation states, which may be used to inform efforts to design surfaces with particular characteristics. We are particularly interested in systems containing disparate metal centers, such as Mo2WO6−, MoWOy− and MoAlOy−

Initially we focused on the group 6 pure metal oxide clusters (Mo and W) and then extended those studies to binary clusters within group 6 (MoWOy). We have studied the pure group 5 and group 6 metal oxide clusters (Nb, Mo, W) and have extended these studies to binary clusters combining metals in the same group (i.e. MoWOy) as well as those in two different groups (MoVOy and MoNbOy) in an effort to learn about the electronic and structural strain set up by proximity of disparate metal centers in a metal oxide complex. Interesting new structures, governed by disparities in metal-oxygen bond strength, resulting in interesting spin properties and unequal oxidation states for adjacent metal centers.

Systematic structural differences between the Nb2Oy− series and the group 6 neighboring series, Mo2Oy−, were determined. Energetically favored structures of Nb2Oy− clusters were shown to reliably have more M-O-M bridge bonds than Mo2Oy− clusters, for a given value of y. While this was consistently the case for both the anions and neutrals, generally, the stability of the bridge-bond structural motif is greater for the neutral clusters than for the anions.

Determining cluster structures is particularly useful in the interpretation of reactivity studies, which is another research avenue in our lab.