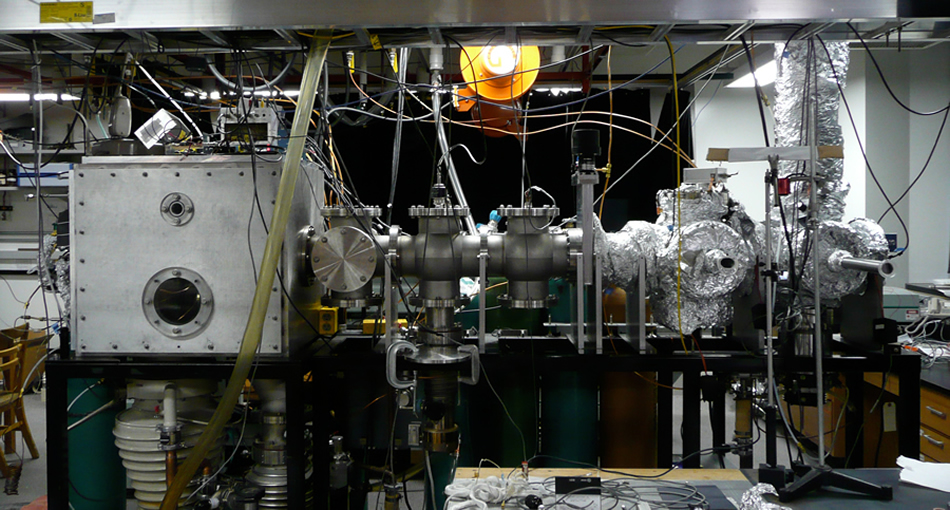 The Big Instrument is the main instrument used in the CC Jarrold group. Several different experiments can be performed on this instrument including photoelectron spectroscopy, reactivity of anions, and resonant two-photon detachment. All of these experiments begin by generating met

al suboxide ions in the source region. The most common experiment performed on this instrument is photoelectron spectroscopy, so the apparatus is described with respect to this experiment.  Note that the schematic of the apparatus includes a VMI region that the group hopes to install when funding becomes available. 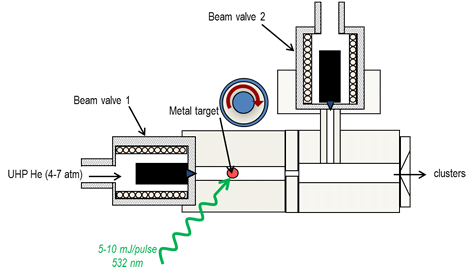 Schematic of the ion source.

A distribution of pure or binary metal oxide anions are generated using a pulsed molecular beam valve/ablation laser ion source, a simplified diagram of this source is shown to the right. Helium carrier gas is introduced using a pulsed (30 Hz) valve (beam valve 1) and approximately 8 mJ/pulse of the second harmonic (532 nm) of a Nd:YAG, is focused onto a rotating rod (not shown) or pressed metal powder source. The pellet source is made by pressing the metal powder at high (2-3 tons) pressure into a solid pellet. By using this method, we are easily able to make samples with mixtures of more than one metal (i.e. Mo-V, Mo-Nb, Mo-Al). 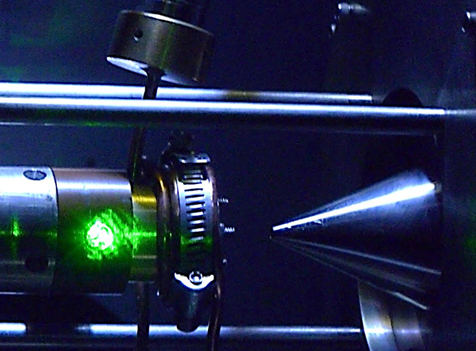 The ions are then skimmed and the anions are accelerated to 1 keV (green in figure) into a time-of-flight spectrometer (blue in figure). The ions pass through a 3-mm mass-defining slit into the detector region (red in figure) and collide with a dual microchannel plate detector assembly. Anions are photodetached 15 cm upstream of the ion detector using the second (532 nm, 2.33 eV), third (355 nm, 3.49 eV), or fourth (266 nm, 4.66 eV) harmonic output of a second Nd:YAG laser, timed to intersect a particular ion packet. There are many ways that photodetached electrons can be extracted and detected and they all have different advantages and disadvantages. The method used on this instrument is called time-of-flight. In this method, a small fraction of the photodetached electrons travel the length of a 1 m field-free drift tube situated perpendicular to both the ion and laser beam axes. Data collection is slower for this method compared to others such as a magnetic bottle, since only a very small fraction of the electrons are detected (opposed to 100% for a magnetic bottle). However, time-of-flight methods produce higher resolution data and angular information is not lost, so anisotropy parameters can be measured.

The drift times of the photoelectrons are recorded relative to the detachment laser pulse using a digitizing oscilloscope. The drift times are averaged over 1,000,000 laser shots and converted to electron kinetic energy.

The energies are calibrated using well-known PE spectra, such as O−, OH− and WO2−. Besides photoelectron spectroscopy, we also perform ion beam hole-burning experiments, reactivity studies, and resonant two-photon detachment (R2PD). The instrument is operated slightly different for these experiments.

In many of the species that we study, multiple bands are observed in the photoelectron spectrum and DFT calculations predict more than one energetically competitive isomer. In order to determine if the observed bands are from one isomer or more than one isomer populating our molecular beam we perform ion hole-burning experiments. This experiment is run almost exactly like the photoelectron spectroscopy experiment, but the anions are intersected by a third laser that is 40 cm upstream of the photodetachment region. The hole-burning laser is a Optical Parametric Oscillator (OPO) whose output can be varied from 410-709 nm. The wavelength of the hole-burning laser is chosen such that only the lowest energy transitions can be accessed. The PE spectrum of the metal oxide is then collected, using the same methods as described above, but alternating between the hole-burning laser on and off and with both spectra collected over the same number of laser shots. If the lowest energy transition corresponds to one of two or more isomers, the bands in the PE spectrum will change disproportionally to each other. A simplified energy diagram with the hole burning laser “off” and “on” is shown below for MoVO3−. The relative intensity between bands A and B is different on the hole-burned spectrum, indicating that there are multiple isomers in the beam.

In resonant two-photon detachment studies, the anions are intersected by the focused output (0.4 – 2 mJ/pulse) of the Nd:YAG pumped OPO, upstream of the detachment region (i.e. the same laser interaction region as ion hole-burning). The first photon promotes an electron into an excited state of the anion and the second photon detaches it. The detached electrons are deflected to a microchannel plate detector. The signal is amplified and electrons are given equal weight by processing with a constant fraction discriminator and measured using a gated integrator (Stanford Research Systems, SR250). Simultaneously, the ion signal is measured by a second gated integrator, and the OPO output power measured and converted to a DC voltage by a power meter (ThorLabs). The laser is tuned over the desired wavelength region by 0.2 or 0.1 nm steps and the ion signal, electron signal and power are recorded at each 0.1 nm step and averaged over 300 laser shots and the three signals are recorded by a computer using a home-written LabVIEW code.

Projects associated with this instrument include: